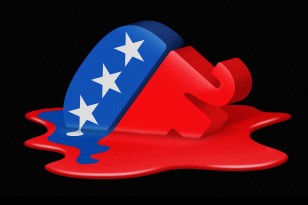 Arthur Ahrens of Branchport is the author of this article which is published here with permission. Views expressed by contributors are their own.

Traditionally, the run-up to a convention sees a party attempting to tame rival factions and unite around a dynamic vision for the future. Instead, Republicans have spent the summer in a self-immolating downward spiral. — Tim Alberta, Politico Magazine

A party’s platform is the document in which the Party states its principles and what it stands for. In the past the Republican platform has made clear it stands for the rule of law, free markets, fair and simple taxes, religious freedom, home ownership, entrepreneurship, the Second Amendment, banning abortion, fair elections, and much more.

No longer. In 2020, the Republican Party states that it has no principles, at all. With the exception of enthusiastic support for Trump. No rule of law, free markets, taxes or anything. It has wholly become a party of personality. The Party of Trump.

The Republican Party is Dead. The Trump Party is alive and well.

About the future of the Republican Party:

* Contributor at NewNY23rd.com where we discuss the politics, economics, and events of the New New York 23rd Congressional District (Allegany, Cattaraugus, Chautauqua, Chemung, (Eastern) Ontario, Schuyler, Seneca, Steuben,Tioga, Tompkins, and Yates Counties) Please visit and comment on whatever strikes your fancy.
View all posts by whungerford →
This entry was posted in 2020, Campaigning, Congress, President, Trump and tagged GOP Platform. Bookmark the permalink.

8 Responses to Wither the GOP