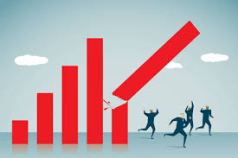 Serious recessions may not be inevitable, more likely they have an avoidable cause. The housing crisis, the dot com bubble, and the current trade war are examples.

Annie Lowrey, in an informative article in The Atlantic, writes:

The Next Recession Will Destroy Millennials

Millennials are already in debt and without savings. After the next downturn, they’ll be in even bigger trouble.

Recessions are never good for anyone. A sputtering economy means miserable financial, emotional, and physical-health consequences for everyone from infants to retirees. But the next one—if it happens, when it starts happening—stands to hit this much-maligned generation particularly hard. For adults between the ages of 22 and 38, after all, the last recession never really ended.

Here are some of her reasons:

Lowrey notes that millennials’ fininacial stress hurts the economy and thus affects all. I am reminded that poverty among seniors would similarly depress the economy; cuts to Social Security and Medicare would exacerbate this.

* Contributor at NewNY23rd.com where we discuss the politics, economics, and events of the New New York 23rd Congressional District (Allegany, Cattaraugus, Chautauqua, Chemung, (Eastern) Ontario, Schuyler, Seneca, Steuben,Tioga, Tompkins, and Yates Counties) Please visit and comment on whatever strikes your fancy.
View all posts by whungerford →
This entry was posted in Economics, Seniors and tagged Millennials, recession, The Atlantic. Bookmark the permalink.