A look at Primary Voter Turnout

It seems like there has been more political activities  in the NY23rd for the 2018 Congressional elections than in other years. More noise. More organized events. More grass root groups. More people involved. But, will the efforts spent over the past year and a half produce results?

Looking at the Democratic voter turnout in the 2018 primary elections: We had  a record  23,501 NY 23rd voters participated in the June 26 Federal Primary. (NYS Board of Election). Many wondered if the reason for the large turnout was the fact that we had a year and a half of campaign activities that whittled the candidates down from ten to five.

In order to see if the Democratic voter enthusiasm has continued to increased, I compared the voter turn out at the September 13 2018 Primary to the September 2014 Primary turnout. The big drawing card for each was a contested race for Governor. In 2014, Governor Cuomo was opposed by Zephyr Teachout. In 2018 he was opposed by Cynthia Nixon. Below is the comparison of the number who voted in that race by county.

Please note in the table below, that the single asterisked (*) number included the absentee ballots that the County BOE reported as of Thursday, September 28 on the County’s website. The Counties without an asterisk had not reported their absentee ballots yet. Those numbers will increase.(Ontario and Tioga Counties are in two different Congressional Districts, and the number of voters reported are for the whole county, not just the NY23rd portion in both 2014 and 2018. 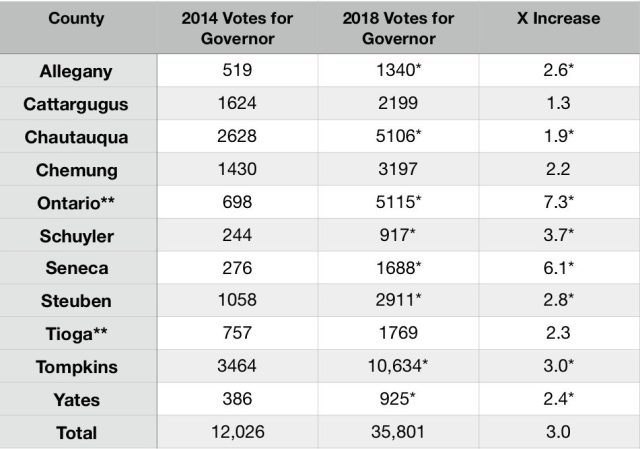 ** these counties are in the NY23rd and another congressional district. The number represents voters  from the whole county, not just the NY23rd portion

Primary voter turnout has indicated that a Blue Wave has hit the NY23rd, but some counties more than others. Hard work is needed to make it be big enough to wash over the entire district.  The Wave needs to include concerned voters from all  parties, and those who are not in a party. It can be do.

Retired Teacher, political science geek, village trustee. I lean a little left, but like a good political discussion. My blog, the New NY 23rd (http://newny23rd) is about discussing the issues facing the people of our new congressional district. Let's hear all sides of the issues, not just what the candidates want us to hear.
View all posts by pystew →
This entry was posted in 2018 and tagged Blue Wave, NYS Primary results. Bookmark the permalink.

2 Responses to A look at Primary Voter Turnout