How Republican is the NY-23rd?

After Nate Shinagawa almost defeated Tom Reed in 2012, NY-23rd democrats hopefully looked forward to the next election. Then, in 2014, the anti-SAFE Act energy sparked the intensity of the GOP voters, and dampened Democratic voters’ spirits. In 2016 the Trump Campaign had the same effect. In both elections, many voters of the other parties, or not in any party (aka “Blanks”) were either caught up with the anti-SAFE/Trump bandwagon, or, sat home on election night.

These elections gave NY23rd-ers reasons to feel overwhelmed by republicans. Yes, there are more Republican voters than Democratic voters in our district, but the difference might not as large as some people think. The chart below show the number of voters registered for each party (or no party) as of November 1 2017. (note:the Other Parties include Green, Working Families, Women Equality Party, and Reform Parties). As you can see,  Republicans have just over  5% more voters than the Democrats. 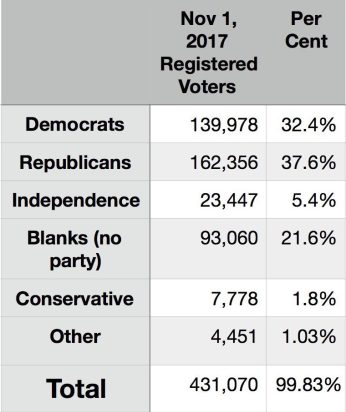 Is it difficult to overcome a 5.2% enrollment deficit?

It’s not easy to overcome a 5.2% enrollment deficit, but it is not impossible.

Allegany, Cattaraugus, Chemung, Schuyler, Yates, and parts of Monroe and Ontario Counties made up the NY-29 Congressional District. Registered Republicans were 42.1% of the voters; Democrats had 30.4%.  Even with more than an 11% disadvantage, Democrat Eric Mass defeated incumbent Republican Randy Kuhl, 51% to 49% (5,330 votes). Of course the 2008 election and the 2018 election are not parallel; It was Massa’s second time he ran against Kuhl and the Democratic community was super-motivated since they wanted to replace Bush with Obama. But the fact is  democrats overcame a 11% voter disadvantage in 2008; they can overcome a 5.2% disadvantage in 2018.

There is no question that since the 2016 election, voter intensity  has shifted from the Republicans to the Democrats. Both parties need to convince the unaffiliated  (“Blank”) voters and those in the Independence Party  (and others–Green, Working Families, Women Equality Party, Conservative and Reform Parties) to vote for them in order to win. In other words, for the Democratic nominee for Congress to win in November, their campaign and supporters need to work hard to get their party voters, as well as a majority of the other voters, engaged and to the polls.

The first step is getting a large number of voters to the June 26 Democratic Primary. The voters are more apt to participate in the Primary if they are well-informed about the  candidates.

Winning in November will not be easy, but it is not impossible.

Retired Teacher, political science geek, village trustee. I lean a little left, but like a good political discussion. My blog, the New NY 23rd (http://newny23rd) is about discussing the issues facing the people of our new congressional district. Let's hear all sides of the issues, not just what the candidates want us to hear.
View all posts by pystew →
This entry was posted in 2018 and tagged 2016 NY 23rd Candidates, Democrats in the NY-23, Eric Massa, NY-29th, Randy Kuhl, Republicans in the NY-23. Bookmark the permalink.

52 Responses to How Republican is the NY-23rd?