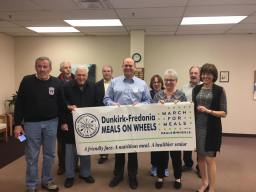 The (Corning) food pantry, its dedicated volunteers, and all those who have donated strengthen families and support communities,” Reed continued. “When our neighbors are facing tough times, the entire community steps up to positively impact their lives. Whether that means food, a monetary donation, or their valuable time, the local community understands that we need to care for everyone in our community so that we can make it better.–Tom Reed

For Tom, private donations of food, money, and time are all that is needed.

How can Tom Reed be supportive of federally funded programs like Meals on Wheels and oppose Federal funding? There is an easy answer–his support for MOWs is tempered by his dislike of Federal spending.  If funded privately, it’s fine; if funded by the public, not so much.

This is true of other hunger programs:

The premise of Tom’s views is that the cost of Federal spending on these programs outweighs the benefit of them. Tom would shift the cost from relatively well-off taxpayers to those in need.

Tom’s views on the budget are similar–there is a hierarchy of concern:

Here is an explanation in Tom’s own words:

Rep. Tom Reed (R-N.Y.), who also opposed the bill, pointed to the Federal Reserve’s hike of a key interest rate this week. He warned that the benefits from the additional spending will hit taxpayers with larger debt and the financing of the more than $20 trillion debt.

Spending which benefits the people is less important than the deficit. Tom sees interest paid on the national debt as going down a rabbit hole, rather than being in large part paid to American people and institutions that choose to buy government bonds.

“You’re going to eat that up in an interest payment in seconds given the nature of where the rates are going,” Reed said.

Spending which benefits the people is less important than the deficit.

…spending is a different kind of impact on the deficit. That’s a direct bean-counting effect,” Reed said.

Low taxes–good; less spending, also good, says Tom. Tom holds the voodoo belief that tax cuts pay for themselves. What Tom means by a direct bean-counting effect, I can’t imagine. Bean counter is a pejorative term for one overly concerned about spending, much like Tom.

Cutting spending for Meals on Wheels, Foodbank, and the like has consequences:

Many likely cuts to domestic government programs are penny wise and pound foolish, anything but “common sense.”

* Contributor at NewNY23rd.com where we discuss the politics, economics, and events of the New New York 23rd Congressional District (Allegany, Cattaraugus, Chautauqua, Chemung, (Eastern) Ontario, Schuyler, Seneca, Steuben,Tioga, Tompkins, and Yates Counties) Please visit and comment on whatever strikes your fancy.
View all posts by whungerford →
This entry was posted in Constituents, Reed's Views and tagged foodbank, Meals on Wheels, Poverty, SNAP. Bookmark the permalink.