Is there a “golden mean” between extremes in politics?

Posted on February 3, 2018 by whungerford 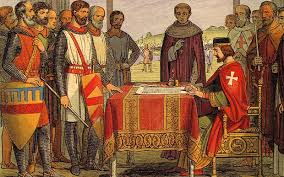 Magna Carta: King John  recognized the rights or noblemen and ordinary Englishmen. It established the principle that no one, including the king or a lawmaker, is above the law.

One might … conjecture that there is a limiting situation of some sort, a “boundary” with all convergent series on one side, all divergent series on the other side–at least as far as series with monotonic coefficients are concerned. This notion of “boundary” is of course quite vague. The point … is this: No matter how we make this notion precise, the conjecture is false.–“Principles of Mathematical Analysis,” Walter Rudin, 1964

The unfortunate government shutdown is further proof that the extremes on both sides of the aisle continue to focus on their own self interests and not the needs of the American people. I am deeply disappointed these extremists, who are refusing to compromise, have prevailed.–Rep. Tom Reed, Jan 20, 2018, facebook

Is there a “golden mean” between extremes in politics?

Is there a point between extremes that somehow defines what is right and reasonable in political discourse. Tom Reed seems to believe there is, and that his political views and the compromise position of the “problem solvers” defines it. However:

Was the Magna Carta, by which King John ceded power to the barons liberal or conservative? I think liberal–it started a progressive trend away from absolute monarchy. On the other hand, at least initially, it recognized the existing balance of power between the monarch and the barons–the ruling class. Was it liberal in that it recognized change or conservative in that it presumed to codify the status quo?

What about the Constitution? Overall it seems liberal: it established a republic rather than a monarchy, which some favored. It was much more conservative in its original form than it is today. The amendment process, which facilitates change without revolution,  is a very liberal notion. Are the First, Fourth, Fifth and Ninth Amendments liberal and the Second and Tenth conservative? Perhaps that depends on how they are interpreted by the courts.

Consider the recent tax bill; is it liberal or conservative?

In my opinion, this “reform” is neither liberal or conservative but reckless and opportunistic.

No matter how we try to make the notion precise, there is no halfway between right and wrong.

2 Responses to Is there a “golden mean” between extremes in politics?