Do we read only headlines?

Posted on February 2, 2018 by whungerford 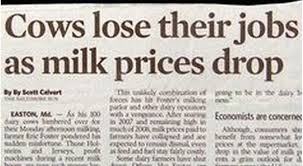 It doesn’t make headlines, but the most important job we have is helping our constituents and small businesses…Rep. Tom Reed

Do we read beyond the headlines? President Trump may not. Tom Reed may not and suppose we don’t either. Tom recently posted articles on facebook with these headlines:

Tom may not have read beyond the headlines, but his constituents did. Here is a sample of what they found:

Did Tom or the staff member who posted it read beyond the headline? Does Tom know that his constituents may read what he posts? What do readers think?

* Contributor at NewNY23rd.com where we discuss the politics, economics, and events of the New New York 23rd Congressional District (Allegany, Cattaraugus, Chautauqua, Chemung, (Eastern) Ontario, Schuyler, Seneca, Steuben,Tioga, Tompkins, and Yates Counties) Please visit and comment on whatever strikes your fancy.
View all posts by whungerford →
This entry was posted in Reed's Views, Taxes, Trump. Bookmark the permalink.

7 Responses to Do we read only headlines?