How Much Would You Pay To Defeat Rep. Reed?

There are inherited problems with Primary Elections. One is that people don’t want to donate to a candidate who might not be the party’s nominee. We won’t know who will be the NY23rd’s Democratic Congressional Candidate until after the June 26 Democratic Primary. That creates a major problem. The Democratic Candidate will need funds. Calling donors takes time and he or she also has to campaign.

Let’s look at some facts:

The GOOD NEWS is that we can help replace Tom Reed.

Grassroots Volunteers for a Reed-Free 23, a group of concern activitists from the Jamestown area, have set up an Act Blue fund to raise money to be placed in an escrow account. The money in the account will go directly to who wins the June 26 Democratic Primary.

The following letter, from the Grassroots Volunteers for a Reed-Free 23, explains our needs and the process of donating through Act Blue.  (Follow this link for a pdf copy of the letter below Reed-Free 23 letter which can be emailed to friends or placed on social media).

Note, the links in the copy of the letter are not live. You can reach the information about the candidates by clicking here and go to the Act Blue site by clicking here. 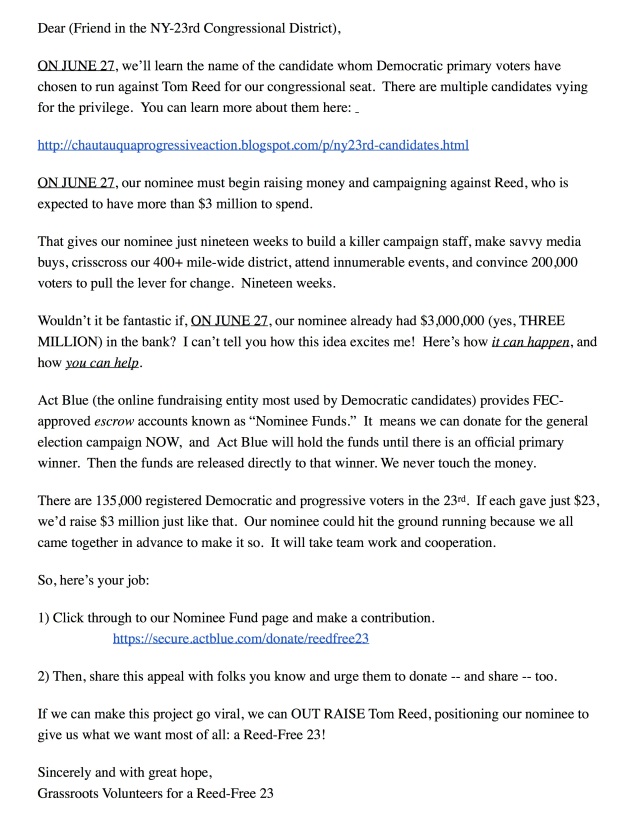