How can a tax code be broken? 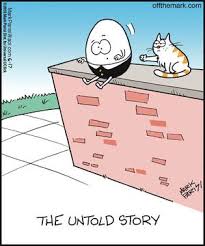 The only thing I care about is how much I have to pay. If a politician says he will lower my taxes, while I don’t believe it for a minute, that person has my vote. — one woman’s opinion explaining her intention to vote for RMN

This is Mike from Micro. Your computer is broken, but I can fix it.–Heard all too often on the telephone

Tom Reed and the House Ways and Means Committee want to convince us that our federal tax code is broken. They plan to tell us that 31 times this month. Repetition is convincing, but how can a tax code be broken?

I can imagine a broken egg, a broken leg, and a broken heart, but not a broken tax code. How can a body of law, which is an idea rather than a thing, be broken?

If Congress broke the tax code, why do we think they can fix it?

How is the tax code broken? Here is what they suggest in the first week of August:

What is important to this taxpayer is how much I owe; none of the above directly addresses that. Can any of the above be taken at face value?

Perhaps the tax code isn’t so much broken as in need of improvement. How might Congress fix it? Assuming changes are revenue neutral, only by changing what taxpayers owe, most likely by:

Can those who suggest that everyone can pay less without harmful consequences be trusted? I think not.

* Contributor at NewNY23rd.com where we discuss the politics, economics, and events of the New New York 23rd Congressional District (Allegany, Cattaraugus, Chautauqua, Chemung, (Eastern) Ontario, Schuyler, Seneca, Steuben,Tioga, Tompkins, and Yates Counties) Please visit and comment on whatever strikes your fancy.
View all posts by whungerford →
This entry was posted in Reed's Views, Taxes. Bookmark the permalink.

6 Responses to How can a tax code be broken?