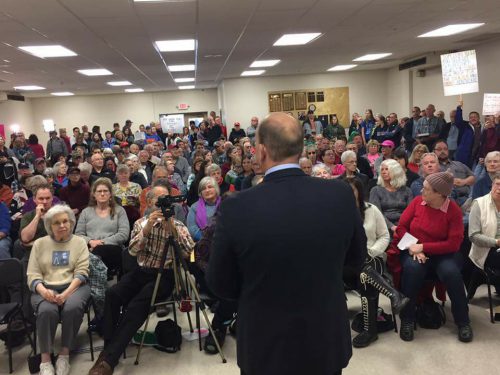 Rep. Tom Reed has announced his Town Hall Meeting schedule for Saturday, June 3. They will be in the eastern/central part of the district–in Tompkins, Ontario, Steuben, and Chemung Counties.

For those true-hearted Town Hall fans, the Geneva meeting is scheduled to end at 12:00 and the Bradford meeting is slated to start 90 minutes later. According to Google Maps, it is only a 50 minute drive. You can take in both events, and even pick up lunch at Penn Yan’s McDonald’s!

Rep. Reed usually tells us what he wants us to hear. He needs to be reminded of  his AHCA vote, which includes cutting $880 Billion from Medicaid and adding $600 Billion to cut taxes for those earning $200,000.

One thing that he didn’t bring up at the May Hinsdale meeting is the AHCA has a “lifetime limit” clause. This video/article tells that the ACA became law a few days before a young boy would have reached his “lifetime limit”. His parents are afraid of what would happen if the ACA is repealed.

The Trump Budget has appeared, and  Reed is now concerned about the “lower-income” side of the equation:

“As you deal with a lot of the lines in the federal budget, obviously, a lot of them are geared toward the lower-income, more poverty side of the equation, and rightly so,” Reed said. “Those are people that are dealing with life’s curveballs. They’re in a position to need assistance, and I will stand with those types of programs.” Buffalo News.

Has he really changed of heart, or is he reading the polls?

Last Saturday (May 20), Rep. Reed spoke on MSNBC on the Russian Investigations. He said:

“When you see things like the Intelligence Director Clapper says he saw no evidence of collusion, when you see the FBI Director Comey testify that no one asked him to do anything in regards to the investigations under oath. You know these are indications that the – let’s see where the investigations go, but let’s not come to a predetermined conclusion that the president is somehow engaged in this nefarious activity, I just don’t see it at this point in time.” MSNBC

Here is a little reminder of Rep. Reed’s May Town Hall events:

Retired Teacher, political science geek, village trustee. I lean a little left, but like a good political discussion. My blog, the New NY 23rd (http://newny23rd) is about discussing the issues facing the people of our new congressional district. Let's hear all sides of the issues, not just what the candidates want us to hear.
View all posts by pystew →
This entry was posted in Congress, Reed's Views, Town Hall Meeting and tagged AHCA, Bradford, Erin, Geneva, Town Hall Meetings, Trumansburg, Trump's Budget. Bookmark the permalink.

1 Response to Another set of Rep. Reed’s Town Hall Meetings