the government to spend $3,329,394,000,000. Yes, we will be spending more than we receive. I seem to remember that the Rep. Reed was quick to raise a ruckus when President Obama’s budgets did not balance.

How we spend our money shows us what we value. President Trump has released his proposed budget. The chart below shows us what the President values. We should not be surprised. Defense and Veterans Affairs are receiving increased funding. He is cutting a trillion dollars from Food Stamps and Medicaid, this will drastically affect the NY 23rd, as well as other districts across the nation.

Trump is adding $1.6 billion to start building his promised Wall. That is a  smaller amount than what he has earlier suggested.

But don’t worry, the House members, who have heard from their constituents about their AHCA fiasco, will want to make their budget their budget. Also, one would think that reviving their Health Care proposal and getting their tax reform in order would be priorities . They are key components in reaching our $2.787 trillion revenue goal.

Oh, yes, this needs to be done, and approved by the Senate before October 1. 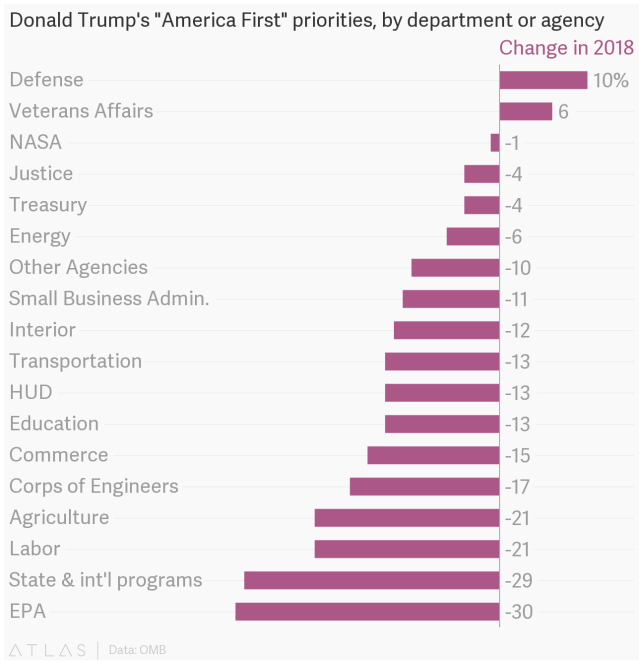 Ex-OMB Director–Trump’s Budget is good for a 1.9 per cent growth, rather than 3 percent.

Retired Teacher, political science geek, village trustee. I lean a little left, but like a good political discussion. My blog, the New NY 23rd (http://newny23rd) is about discussing the issues facing the people of our new congressional district. Let's hear all sides of the issues, not just what the candidates want us to hear.
View all posts by pystew →
This entry was posted in Congress, Economics, Legislation, Uncategorized and tagged Trump's Budget Cuts, Trump's Budget Cuts in Medicaid. Bookmark the permalink.

2 Responses to Trump & the Budget