The following was created by the PRO Allegany group and was presented  at a meeting of NY-23rd Resistance Groups Leaders, some Democratic County Chairs, and five potential 2018 Democratic Congressional Candidates in Hornell of Sunday, April 23.   It is presented with minor editing.

There are a few ways, to unseat Tom Reed, but only one over which we have control is to elect someone else.

So the 25% that didn’t turn out?  The numbers tell us that 2,700 registered Dems and Blanks didn’t vote.  This is a serious problem, but it’s not insurmountable.  Our job must be to register new voters and reenergize existing voters and get all of them to the polls.

Let’s talk money:  If every registered Dem in the 23rd contributed (on average) $20 right now, we’d raise more than $2 million for a war chest.  So let’s hurry up and figure out the mechanics of that. Someone suggested a PAC political action committee.  If that happens, I propose we call it the Committee to EJECT Tom Reed!

Now, let’s talk candidates.  I asked the folks in our group to share their most desired characteristics and this is the result:

#1 Has enough time, energy and commitment to devote to a schedule that would kill any normal human.  This person has at best a year and a half to convince at least 100,000 people to support him or her.  So you’d better be healthy and love to travel!  A bonus would be having long and deep ties to this region.

#2 Our perfect candidate is media-savvy – as comfortable with a microphone, cell phone video or TV camera stuck in his face as he/she is one-on-one.

#3 Our candidate will have no skeletons in the closet.  Reputation is KEY, and vetting cannot be thorough enough.

#4 Our candidate is someone who really, truly believes in representing the individuals in the district, so that means – lots of little campaign contributions and NO corporate donors.  (See Trailblazers PAC for more details!)

#5 And someone who can connect with young voters. New voters.  Millennials.  So no stuffed suits or talking heads need apply.  Show voters that you embrace diversity, inclusivity, and tolerance. You must exhibit that you support renewable energy, single-payer health care and a living wage.

#6 We want a listener, not an orator.  But of course you’ll have to speak.  When you do, speak in simple, clear messages and repeat, repeat, repeat.  Love ‘em or hate ‘em, sound bites and messaging work.

When not speaking, of course you must listen.  To that end, we strongly suggest that you BEHAVE on the campaign trail like someone who is already a member of congress.  Think about that for a moment….  In Leadership courses, we’re taught to, “First find a small problem and fix it fast.” This way your new team has reason to believe in you right out of the gate.

So, when you’re out in the field and a prospective voter raises an issue, write it town and have your team “look into that.”  Then get back to that person (AND THE MEDIA.)  Even if you can’t fix it, you’ve shown that you are committed and you’ve given that voter (and everyone that person tells) a reason to support you!  Plus, YOU get to tell the story. Over and over and over again.  There are so many advantages to doing constituent service, but most especially when you (apparently) have nothing to gain but one single vote. 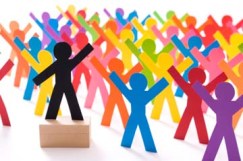 #7  Finally, our ideal candidate will recognize that there are literally THOUSANDS of passionate, talented, eager, committed people in the district just chomping at the bit to be “put to work”.  We can be your feet on the ground.  Need petitions signed?  We’ve got that.  Phone banking?  Voter registration drives?  Done!

And that’s the easy stuff.   Now, think of all the paid staff and other resources available to an incumbent…  because you’re acting like an incumbent, remember?

You’ll need a campaign assistant to take down that voter’s concerns and contact information and follow through for you. You’ll need somebody to manage the campaign.  How about someone to stand in for you when multiple appearance opportunities start to come your way?  Take a look around this room.  Chances are those people are here today.

People to staff campaign headquarters?  To coordinate fundraisers?  Those folks will be at our meetings next week.

Already a research team is forming to create graphics, charts, and talking points – all of which will be at our candidate’s fingertips.  Folks in the district are already using the media and technology in new and sophisticated ways – their connections can get your appearances, speeches, and rebuttals IN THE NEWS. ALL. THE. TIME.

An incumbent does this with paid staff (paid in part by you and me through our taxes.)  And you’ll surely have some paid staff.  But you’ll need more help than you can afford.  Look around this room.   We are a sea of second-lieutenants.  We are the epitome of bench-strength.  And we’re already on it. <snap>

So, respectfully I say to the Committee Chairs and the prospective candidates here today:

Please call on us!  Don’t overlook us and sincerely — don’t underestimate us. We’re in your corner. We’ve got your back.  And we’ve got critical mass.  By organizing, and acting, and achieving as we have over the past four months we have earned the right to stand beside you as partners in this campaign.   So let it be about collaboration and shared goals.  Let’s devise and establish all the ways we can work together – activists AND committee members — so that together we can EJECT TOM REED and replace him with a candidate who represents the 23rd district as we envision it.

Retired Teacher, political science geek, village trustee. I lean a little left, but like a good political discussion. My blog, the New NY 23rd (http://newny23rd) is about discussing the issues facing the people of our new congressional district. Let's hear all sides of the issues, not just what the candidates want us to hear.
View all posts by pystew →
This entry was posted in 2018 and tagged 2016 NY 23rd Candidates, Campaign Volunteers, Indivisible, Perfect Candidate. Bookmark the permalink.

1 Response to Harvesting Our Political Energy