I arrived at the Allen Town Hall outside  Fillmore, northwest of Hornell around 3:00, knowing that the Town Hall meeting was scheduled to start at 4:00.  I was happy that the weather wasn’t what I expected for an average February day. I should have realized that Sunny and temperatures in the 50*’s would have made the grounds of the Town Hall very muddy. But, I didn’t. At least it was sunny and in the 50’s.

We we got there we quickly realized that it was best to park our car on the side of the road. A good size crowd already gathered. There was a of talking, seeing old acquaints  and meeting new ones. We admired each other’s signs and political T-Shirts, and took pictures of them. It was obvious most we there because they had a gripe with what is happening in our nation capital. There was a small group, maybe a two dozen, that held Trump and Wendy Long yard signs.

Before Rep Reed arrived, a lady with a bull-horn lead us in a verse of “This Land Is Your Land”. Another person with a bull-horn stood on a large truck bed behind most of the crowd told us that he would let us use his bull-horn to ask questions, but not to use it to yell at Rep. Reed.

Rep. Reed’s advance team kept telling us that he would arrive soon. Someone made a point that they wanted a full hour with Reed, and was told that was why he was late. He went overtime at the earlier events and would stay here as long as he needed to. When he arrived one of the bull-horns owner started a  “This is what Democracy looks like”. Reed joined in.

After Reed arrived, it took only a few minutes to get the meeting going. It started with a pledge of alliance. We had to pretend to look at someone’s flag lapel pin, since the only visible flag was one brought by a “hard right protester” which was displayed upside down which is a signal that there is dire distress.

The meeting room at the Town Hall legally holds 49 people. The weather was nice, and we had multiple bull-horns so it was held outside.  Many questions were asked using the bull-horns, and Rep. Reed answered  by using a bull-horn.

The crowd, being noisy at times was generally quiet and listening to the questions. They 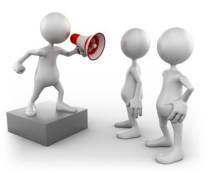 waited for the answers before they reacted. They often reminded the representative to “Answer The Question” when he used the topic to fall back on GOP talking points and not answering the particular question. When Rep. Reed told the crowd what he thinks, (He is Pro-Life) the crowd reminded him that he is suppose represent his constituents and  the constitution. “You Work For Us!” was a common chant.

He listened to a breast cancer patient making a case for not repealing the ACA, and an immigrant telling her story. He was compassionate, but did not waver from the GOP talking points. A question was asked about cutting funds (I think completely) from Western New York refugee programs. Rep. Reed said the had not heard about that, took the questioner’s contact information.

The crowd did not like any of those views..

There were problems hearing the questions and even the answers. That had nothing to do with the noise in the crowd, but many had not used a bull-horn before and there is a trick on hold one, pushing the button, speaking into it and reading the question. I thought the batteries might have been running out.

In the future I would expect that Rep. Reed’s Team would locate larger venues, possibly schools, for his Town Hall Meetings. That could give more order to the meeting, and with a microphones inside, instead of bull-horns outside, people could be able to hear more of the questions/answers.

Rep. Reed needs to really answer the questions. There were too many times in Fillmore that he repeated the GOP talking points instead of going to the point of the question. He needs to put the 716,000 constituents above the needs of the industries that paid for his campaign and the wants of the republican party.

His team has already indicated that they play to be in Tompkins County in the spring. They also aid in Fillmore that their Town Hall schedule will put in large towns and small towns. I read that the part time worker in Tom’s Ithaca office said that he will be in each of the 11 NY23 counties every year. Since they have a Town Hall schedule, they should

Channel 8 of Rochester’s Report and Video from Fillmore

Note: In a comment on the February 20 NewNY23rd article, “Tom Reed needs Tompkins County, and how!” states that there were 250-300 people at Fillmore, and points out other information about the Town Hall.

Comments are welcomed, especially from others who attended Fillmore or the other Town Hall Meeting.

Retired Teacher, political science geek, village trustee. I lean a little left, but like a good political discussion. My blog, the New NY 23rd (http://newny23rd) is about discussing the issues facing the people of our new congressional district. Let's hear all sides of the issues, not just what the candidates want us to hear.
View all posts by pystew →
This entry was posted in Reed's Views, Uncategorized and tagged Fillmore, Reed's beliefs, Town Hall. Bookmark the permalink.

4 Responses to Reed in Fillmore