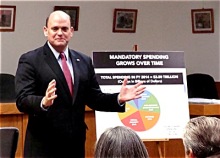 While there are some provisions of the ACA that we support, including guaranteed coverage for those with pre-existing conditions and expanded coverage for children up to age 26, the current law (Obamacare) did nothing to reduce the overall cost of healthcare.–Tom Reed replying to a letter

Or consider the current GOP panic over health care. Many in the party seem shocked to learn that repealing any major part of Obamacare will cause tens of millions to lose insurance. Anyone who studied the issue could have told them years ago how the pieces of health reform fit together, and why. In fact, many of us did, repeatedly. But competent analysis wasn’t wanted. —Paul Krugman

In response to a letter on Obamacare, Tom wrote:

The skyrocketing costs of healthcare for families under the current system has made repealing this law, and replacing it with a more affordable, patient centered system, a top priority.

Obamacare is designed to keep costs down, a fact which Tom refuses to recognize. While the popular benefits that Tom does recognize, coverage for college aid students such as his own children for example, are important, they aren’t major reasons for Obamacare.

Whether Obamacare has succeeded in keeping costs down is subject to debate, but the claim that costs have “skyrocketed” is false. The chart shows that cost increases have trended downward since Obamacare was enacted. 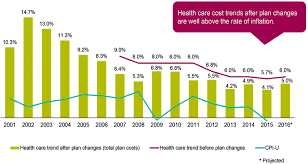 Here is another chart that makes the same point. When Tom claims that Obamacare “did nothing to reduce the overall cost of healthcare,” tell him that cost increases are down since 2008 and ask him for proof of his claims.

The skyrocketing costs of healthcare for families under the current system has made repealing this law (Obamacare), and replacing it with a more affordable, patient centered system, a top priority.

Republicans can’t agree on a plan to replace Obamacare, let alone one to improve it. When Tom talks about “a more affordable, patient centered system,” ask him to explain what he means by that. If he claims that “market forces” will keep cost increases down, ask why that hasn’t worked in the past.

If healthcare is discussed at Tom’s meetings on Saturday, February 18, expect Tom to claim:

Please ask him to explain why he thinks so.

* Contributor at NewNY23rd.com where we discuss the politics, economics, and events of the New New York 23rd Congressional District (Allegany, Cattaraugus, Chautauqua, Chemung, (Eastern) Ontario, Schuyler, Seneca, Steuben,Tioga, Tompkins, and Yates Counties) Please visit and comment on whatever strikes your fancy.
View all posts by whungerford →
This entry was posted in Health Care, Political, Reed's Views and tagged Obamacare. Bookmark the permalink.