An overflow crowd of more than 30 filled the small Board Room at Rep. Tom Reed’s Town Hall Meting in Barrington (Yates) Saturday. Most were non-republicans. For many this was their first Town Hall experience.

Medicare dominated the discussion. The uncertainty of the path our new congress is going take Medicare fueled the concerns. Rep. Reed didn’t help us feel comfortable about our future.

He started out by explaining that  there are two battles in changing Medicare—1) The Insurance Companies and 2) the high cost of health care. The way to win the Insurance Companies battle, or  the way for the government reduces its payments to the insurance companies, is to issue vouchers (the GOP calls them “premium support payments”) to Medicare recipients. Then we would choose which  insurance plan is best for us, and, if we are able to, add money to the voucher to attain the coverage we really need.  Reed did not attempt to explain how the amount of the voucher would be determined.

Please realize that the “government money” that goes to Medicare is the 1.45% deducted from our salaries from our first teenage jobs to any work we do after we retire. What this Congress is really concerned about is the matching funds our employers pay. That is what they want to reduce.

Rep. Reed chose his words carefully when he spoke on lowering the cost of health care. He briefly mentioned that the most expensive health care happens near the end of life. He the went on to try to find “common ground” that we could all agree on. He began to list “waste, fraud, and malpractice law suits.” That statement sparked a lively discussion on “frivolous” lawsuits. Reed also pointed to different ways to reduce the reimbursements to physicians and hospitals. He gave no real details, but told us that congressional members are looking into ways to reduce that funding. How will that affect our local hospitals?

A member of the audience who lost a brother a year ago to cancer, and whose mother is presently being treated for cancer, lead the discussion on the emotional drainage and the high cost of Stage 4 Cancer. She was very concerned that the vouchers would not cover the needed treatment. Reed responded that there would have to be a plan made early in her treatment to determine the path her physician will take when the patient (family member) enters the final stage.  To some audience members that part of the discussion reminded us of the Death Panels that the GOP used as a scare technique in 2010’s anti-Obamacare campaign.

Rep. Reed foresees that Congress will act on Medicare in March, 2017. As you can see from the table below almost half of the residents of our Congressional District are on Medicare. They need to be made aware of the changes the congress plans to make before it is done deal. 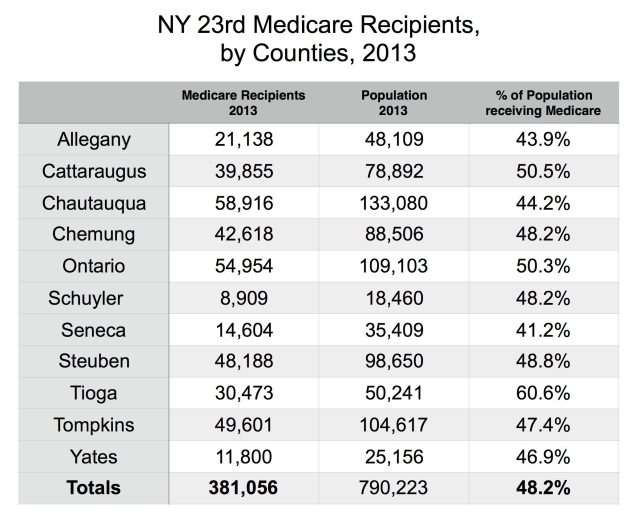 To find the population for each county I googled the county name for example, “Yates County NY population“. (After you google Yates County, you can substitute any county you would like.)’]= The results provided an interactive graph which will show the County’s population from 1970 to the present.

For a more detailed article on the proposed Medicare changes follow this link.

Retired Teacher, political science geek, village trustee. I lean a little left, but like a good political discussion. My blog, the New NY 23rd (http://newny23rd) is about discussing the issues facing the people of our new congressional district. Let's hear all sides of the issues, not just what the candidates want us to hear.
View all posts by pystew →
This entry was posted in 2018, Health Care, Medicare and tagged Cancer, Heath Insurance, Medicare, Medicare changes, Medicare recipients in NY23rd, Rep. Reed's Town Hall Meeting, vouchers. Bookmark the permalink.