This article was submitted for publication by the author, Cath Kestler, resident of Silver Creek. 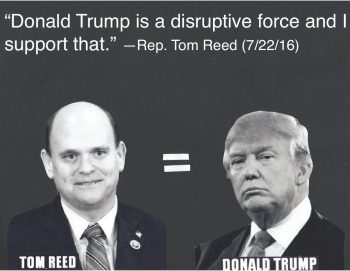 The Trump train is roaring down the tracks and one of the first Republicans to join the conductor and get his ticket punched is—you guessed it, NY 23rd District Representative Tom Reed.

The overly animated, loud-mouthed, xenophobic, often misogynistic bigot shouts from the podium to over-the-top supporters and his views have taken top bill as the circus train rolls into town.  His campaign is a side show really, devoid of facts as Politifacts has declared that 91% of his rhetoric is truly FALSE information that he is feeding you.

Not only is Reed riding the Trump train, he is the New York co-chairperson of his campaign along with North Tonawanda’s own, Rep. Chris Collins, another Republican from Western New York.  Rep. Collins was another big business owner that left WNY in the dust when he closed up shop and ran for office because he wanted his big piece of the pie.

Neither of these representatives are worthy of their office because they don’t represent their constituents or our interests—they both censor their constituency on Facebook and tell us what we want to hear at Town Hall meetings and vote the opposite once they get back to DC.

It seems with Trump’s list of transgressions and outright corruption, it’s hard to believe that most Republicans will endorse him, but never fear, Reed and Collins are here!

Since the mainstream media is all about making Trump look good and they refuse to ask or report about his double-dealings and fraud, I’d like to list some for you:

First off, let’s talk about his illegal contribution to Florida’s Attorney General Pam Bondi, after she received multiple complaints from FL students that were cheated by Trump University.  She received a $25,000 donation from Trump and the inquiry was dropped.  This is being looked into further because Ivanka Trump donated $100,000 and then Rudy Guiliani and Trump hosted a fundraiser for her campaign, stay tuned on this one.

Trump’s flat out refusal to pay for services rendered from contractors; many of them are small business owners.

Trump Model Management, which reportedly had foreign models lie to US Custom officials so they could work in the US illegally.  He kept them in squalor conditions while they earned almost nothing for the work they did.

Trump has a penchant of hiring foreign guest workers at his resorts, claiming that he couldn’t find Americans to do the work.  At his resorts it is reported that he pays his workers $2.60/hour and provides room and board—barracks style living with a cook-plate and toilet, outside shower facilities. If the workers complained he threatened them with deportation.

Trump has a history of being charged with housing discrimination in NYC.

The Trump Network was a pyramid scheme in violation of federal securities regulations.  It involved customers mailing in a urine sample which would be analyzed to produce for them a specially formulated package of multivitamins.

Trump’s casino bankruptcies, which left investors holding the bag while he skedaddled with their money.

The Trump Institute, another get-rich-quick scheme in which Trump allowed a couple of grifters to use his name to bilk people out of their money.

Trump’s use of hundreds of undocumented workers from Poland in the 1980’s who were paid a pittance for their illegal work at Trump Towers.

Trump has connections to mafia figures involved in NY construction.

He had to pay the FTC $750,000 over charges that he violated anti-trust laws when trying to take over a rival casino company.

Not to mention, Trump not paying his campaign staff (that aren’t related to him), which is why he has had so many changes to his upper management.  He hired advisors and didn’t pay them, when they inquired about their paycheck after working a month or so without pay, they were told they were listed as “volunteers” and weren’t going to get paid.

Trump refuses to produce his tax returns; he stated if he did it would end his campaign.  This should raise a red flag to any supporter….

This is just a little sample of the long list and Reps. Reed and Collins still back him.  One has to wonder if one day they want to emulate him or they were promised something big in exchange for their endorsement.

Tom Reed stated, ‘Donald Trump is disruptive and I like that.’  Exactly how disruptive remains to be seen.  The writing is on the wall:  #ByeByeTomTom

I know the secret you are trying so hard to hide.

Retired Teacher, political science geek, village trustee. I lean a little left, but like a good political discussion. My blog, the New NY 23rd (http://newny23rd) is about discussing the issues facing the people of our new congressional district. Let's hear all sides of the issues, not just what the candidates want us to hear.
View all posts by pystew →
This entry was posted in Reed's Views and tagged Trump NYC Housing Troubles, Trump's Corruption, Trump's Rhetoric, Trump's Screts. Bookmark the permalink.