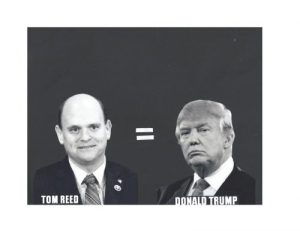 Deb Meeker’s recent article asked What does a Presidential campaign co-chair do? One thing Rep. Tom Reed has done for Candidate Trump was to speak at a Mississippi Delta Grassroots Caucus and Economic Equality Coalition event, explaining his support for Trump. This was May 11. (Note: the original Conference announcement listed: “**1:30 p.m.–Donald Trump representative”)

Rep. Tom Reed of New York is a member of the powerful Ways and Means Committee and a high-profile supporter of Donald Trump. He emphasized Mr. Trump’s successful record in business as a key part of his credentials to lead American job growth if elected President.

The EEC partners believe it is very important to have cordial, civil discourse in our political debates. Congressman Clyburn and Congressman Reed were both entirely civil and positive and we commend both of them for the constructive tone of their remarks and for refraining from personal negative comments.

As a factual matter, the audience included a substantial number of Hispanics, African Americans and women, and it is well known that Mr. Trump had made very controversial remarks regarding those sections of the population.

Congressman Reed acknowledged that even though he is an enthusiastic supporter of Mr. Trump, he did have concerns about his “rhetoric” about Hispanics, women, African Americans and other minorities and has discussed these concerns with Mr. Trump. But he said he believes Mr. Trump will set a different tone in the general election.

A Hispanic woman in the audience said she and the Congressman would have to agree to disagree about his comments, because she said that Trump’s comments were not “rhetoric” but were racist. Another woman leader from California expressed disagreement with Mr. Trump’s comments about women.

Rep. Reed fielded the questions respectfully and calmly, said he appreciated their concerns, but added that he believed that what unites people as Americans greatly exceeds what divides us. We know this was a challenging group of people in some ways for Rep. Reed to deal with, but we appreciated his professional, respectful demeanor and the fact that he came to address our coalition. He received a round of applause for his remarks.

What does this article tell us about our Congressman?

Reed has been quite quiet about this conference. As Deb Meeker pointed out,  “From what we can read in Tom Reed’s press releases, Facebook posts, and mailings, Donald Trump doesn’t exist.”

Has he represented Trump at other events?

Retired Teacher, political science geek, village trustee. I lean a little left, but like a good political discussion. My blog, the New NY 23rd (http://newny23rd) is about discussing the issues facing the people of our new congressional district. Let's hear all sides of the issues, not just what the candidates want us to hear.
View all posts by pystew →
This entry was posted in Reed's Views and tagged Reed supports Trump, Reed surrogating for Trump, Trump as a business leader, Trump's Racists Remarks, Trump's Rhetoric, Why doesn't Reed talk about Trump?. Bookmark the permalink.