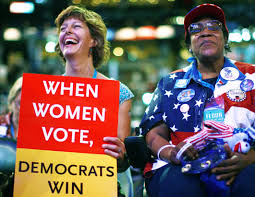 Until 1980, during any Presidential election for which reliable data exist and in which there had been a gender gap, the gap had run one way: more women than men voted for the Republican candidate. That changed when Reagan became the G.O.P. nominee; more women than men supported Carter, by eight percentage points. Since then, the gender gap has never favored a G.O.P. Presidential candidate. The Democratic Party began billing itself as the party of women. — Jill Lepore

Historian Jill Lepore, writing in the June 27 issue of The New Yorker, discusses the history of women in politics. Lepore says that until the 1980s, women favored the Republican Party. This changed when the Republican Party, more or less deliberately turned its back on women.

Between 1964 and 1980, (Phyllis) Schlafly’s arm of the Party steadily gained control of the G.O.P., which began courting evangelical Christians, including white male Southern Democrats alienated by their party’s civil-rights agenda. In the wake of Roe v. Wade, and especially after the end of the Cold War, the Republican Party’s new crusaders turned their attention from Communism to abortion. The Democratic Party became the party of women, partly by default. For a long time, it could have gone another way.

With the end of the E.R.A., whose chance at ratification expired in 1982, both parties abandoned a political settlement necessary to the stability of the republic. The entrance of women into politics on terms that are, fundamentally and constitutionally, unequal to men’s has produced a politics of interminable division, infused with misplaced and dreadful moralism. Republicans can’t win women; when they win, they win without them, by winning with men. Democrats need to win both the black vote and the female vote. Trump and Clinton aren’t likely to break that pattern. Trump, with his tent-revival meetings, is crusading not only against Clinton and against Obama but against immigrants, against Muslims, and, in the end, against every group of voters that has fled the Republican Party, as he rides with his Four Horsemen: Fear, Ignorance, Bigotry, and Smear.

So the G.O.P has come full circle from the party of equality to the party of exclusion. Along the way in lost the allegiance of many women including Hillary Rodham Clinton.

3 Responses to Women in Politics