Our world has been shaken by terrorism repeatedly, but Obama still hasn’t created a plan to combat ISIS. This Administration also dropped sanctions on Iran, the largest state sponsor of terrorism in the world, because of the dangerous Iran Nuclear Agreement. DC John Plumb was a foreign policy aide in the White House when the Iran Nuclear Deal was written and now this deal is the reason Iran is able to fund terrorist activities.

Reed’s June 13 Press Release: “Reed: Defeat Radical Islamic Terrorism.”  is too long to print here, but if you want to read it in its entirety follow this link.

As you can probably tell his focus is on the magical words “Radical Islamic Terrorism” and continue Trump’s criticism of the President and Hillary’s refusal use that phrase. President Obama explained his position well on Tuesday, June 14:

“Groups like ISIL and al-Qaida want to make this war a war between Islam and America, or between Islam and the West. They want to claim that they are the true leaders of over a billion Muslims around the world who reject their crazy notions. They want us to validate them, by implying that they speak for those billion-plus people, that they speak for Islam. That’s their propaganda. That’s how they recruit. And if we fall into the trap of painting all Muslims with a broad brush, and imply that we are at war with an entire religion, then we are doing the terrorists’ work for them.” 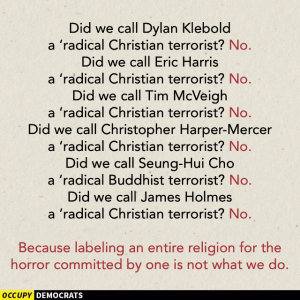 Reed’s Press Release states, “Tom Reed renewed his calls to defeat radical Islamic terrorism and do more to help our law enforcement to prevent these attacks.”

It’s nice that he is now saying that he wants to help our law enforcement deal with terrorism, but we need to remember that last year he voted to shut down the Department of Homeland Security— not just reduce funding but actually closing it. How is closing it going to help protect us from terrorists, especially following up on tips on suspicious activities involving possible American converted terrorist?

Rep. Reed also wrote in his Press Release “We must proactively engage the real enemy, radical Islamic terrorism. It’s only right that we come together to defeat terrorism and keep Americans safe.”

I thought proactive means controlling a possible problem before it escalates. I would think Reed’s 11 votes allowing suspected terrorists to purchase assault rifles and other firearms is the opposite of being proactive.

Reed is now saying that we should come together to defeat terrorism.  How can we come together when Candidate Reed publicly dismisses all of the President’s actions?

There has always been a disconnect between what Rep. Reed tells the voters, and his voting record. Sadly, that seems to be the case here.

Retired Teacher, political science geek, village trustee. I lean a little left, but like a good political discussion. My blog, the New NY 23rd (http://newny23rd) is about discussing the issues facing the people of our new congressional district. Let's hear all sides of the issues, not just what the candidates want us to hear.
View all posts by pystew →
This entry was posted in Constituents, Gun Violence, Legislation, Shutdown, Terrorism and tagged Guns for Terrorists, Homeland Security, John Plumb, Obama's ISIS plan, Orlando, Radical Islamic Terrorism, Terrorists. Bookmark the permalink.