Commander John Plumb to Tom Reed: When your country calls, you go where they ask

The following is a press release from John Plumb for Congress committee and the map was paid of by the Friends of John Plumb. 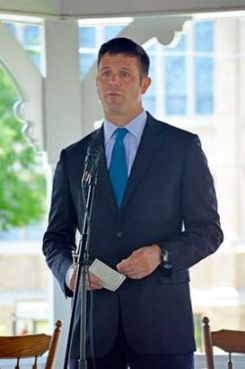 JAMESTOWN, NY- Commander John Plumb, a 4th generation Western New Yorker and Navy Veteran running for Congress in NY-23, today released a map pf locations he has been asked to go in service to our country while in the Navy, the Navy Reserve, and at the Pentagon.

Congressman Tom Reed has repeatedly tried to score cheap political points by attempting to distort Commander Plumb’s years of service to our country. Today’s unprecedented act by Commander Plumb is to show Congressman Tom Reed what selfless service to our nation actually looks like – and that it requires a commitment to going where you are asked, whether it be the Arctic Circle, the Middle East, or even Washington, DC.

“For over twenty-two years I have had the privilege to serve shoulder to shoulder with the best and bravest men and women in the world, all around the world. As any member of the military or their family will tell you, when the orders come down, you don’t question it – you go and complete the mission and protect our country at home or abroad. It’s in our blood, it’s who we are, and I won’t ever run away from that,” said Commander Plumb.

“I can take Congressman Reed’s cheap politically motivated attacks – I would expect nothing less from a Washington Politician – but I will not stand for his continued attacks on the men and women of our armed forces and their families, who always answer the call and go where they’re ordered to serve and sacrifice so people here at home can be safe from harm.” assed Plumb.

If Congressman Reed is so out of touch with regular people that he doesn’t understand military  men and women makes sacrifices for our country and our nation’s safety, then Congressman Reed is unfit to represent New York, our families, our service members and our veterans.”

Retired Teacher, political science geek, village trustee. I lean a little left, but like a good political discussion. My blog, the New NY 23rd (http://newny23rd) is about discussing the issues facing the people of our new congressional district. Let's hear all sides of the issues, not just what the candidates want us to hear.
View all posts by pystew →
This entry was posted in 2016, Congress, Constituents, Defense, Reed's Views, Veterans and tagged /;', anti-Veterans, cheap political attacks, Locations Plumb has served, Plumb's commitment, Plumb's military service, Reed is out of touch, Reed is unfit to represent, Washington Politics. Bookmark the permalink.

5 Responses to Commander John Plumb to Tom Reed: When your country calls, you go where they ask