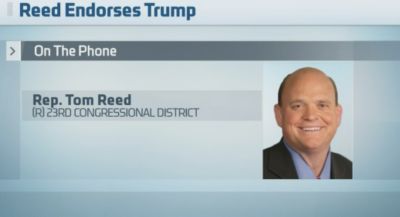 A letter in the April 6 (Dundee) Observer started with:

“It was so disappointing to read Congressman Tom Reed has endorsed a megalomanic (one who has infantile feelings of personal omnipotence) like Donald Trump for the high office of president of the United States.

The author states that he has been:

He went to point out what Trump has done in his campaign that shows that “he is a disgrace to all decent men and women who call themselves Republicans.”

He summarized his feelings by saying that Trump:

and ends his letter by saying, “I hope Reed will stop and rethink his endorsement of Trump…he has made a big mistake by endorsing Trump.”

The author of the letter probably didn’t see the Salamanca Press’ article  “Reed Sticking with Trump” which reported that Reed explained why he is sticking with Trump, “With Trump getting a majority of the delegates, I think he’s the better candidate.”

The real message Reed is telling the lifelong Goldwater Conservative Republican and others, is that it is acceptable to insult certain segments of our society and military heroes; it benefits the United States to promote more nuclear counties and to disregard international laws.

The author of the letter didn’t realize that Reed is a Co-Chairman of Trump’s Leadership Team.  Trump needs Reed and Reed needs Trump. Reed will not rethink his endorsement of The Donald.

How many conservatives will Reed disappoint?

Retired Teacher, political science geek, village trustee. I lean a little left, but like a good political discussion. My blog, the New NY 23rd (http://newny23rd) is about discussing the issues facing the people of our new congressional district. Let's hear all sides of the issues, not just what the candidates want us to hear.
View all posts by pystew →
This entry was posted in 2016, Congress, Constituents, President, Reed's Views and tagged Conservative, Goldwater Conservatives, NYS Primary, Reed Co-Chairman of Trump's Team, Reed insults Veterans, Reed John McCain. Bookmark the permalink.