Written by Deb Meeker: Congressman Reed’s town Hall in Newfield, NY started promptly at 8:30, with twenty-five to thirty people present; I (Deb) have added some parenthetical observations of my own, which I hope will help to clarify the things. I think we all ought to be thinking about with Reed’s responses. 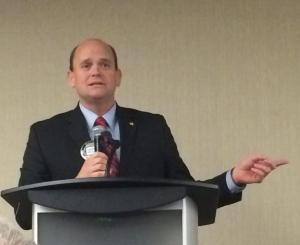 After the pledge of allegiance , Rep. Reed got out his pie charts to show the US budget’s discretionary fund break down. He did not have a chart for The US budget’s mandatory spending. He used the term  “autopilot spending”  as something he would like to look into reforming to lower the government spending. Mandatory—autopilot—spending includes Social Security, Medicare and Medicaid, debt interest, and other line items. (I notice here a subtle shift away from his focus on the whole SS/Disability kerfuffle that he himself is responsible for promoting. I wonder if he hasn’t received some pushback from his constituents over some of his remarks about the “entitlement” that is Social Security, and is now pouring his old whine (sic) into new wine bottles.)

As expected, Rep. Reed focused on China breaking existing trade rules and using Chinese government intervention to create an unfair advantage. He expressed his disdain with China saying (and this is an actual quote), “We should all think of China as the Bogey Man!” (My observation: let us note here Reed’s newest addition to his Us vs Them list, otherwise known as Who Should We Fear Now? Previous groups have included the disabled, the working poor, the Albany cabal, gun control advocates. This is the tactic of someone who must maintain divisions among his constituents in order to maintain his currency—to say nothing of his office—as he isn’t able to do so on ideas or deeds alone.)

The topic from the first attendee to speak concerned the extreme flooding in Newfield, and the continued frustration of its residents about the clean up, repair, and maintenance of their properties after rain and snow storms over the last three years. Because of stream and creek protections, these residents’ hands were tied, leaving no way to fix the problem from the drainage perspective.The same person stated that with no restrictions on the railroad, rails are built in areas that exacerbate the conditions, and so more regulations on the railroads were necessary. One person told Reed they needed assistance in getting local, state, and federal attention to their plight. As residents understand it, they are responsible for cleaning, maintenance and repair of their own properties after the catastrophic flooding. The town of Newfield has exhausted their budget for cleanup of road repair and bridges, etc. due to the flooding of 2014 – 2015. Last year’s flooding caused the closing of a bridge in Newfield which erased one trailer park’s access in and out of that park.

Rep. Reed paid a great deal of attention to their concerns and promised to help them form a coalition (with one main person to be the “point-man” for further contact to his office). Mr. Reed guaranteed he would look into their problems and get the attention of those who could help.  A woman asked “why not look at the reasons for the ‘new normal” weather patterns as well as taking care of the aftermaths?”  Reed, while being careful to not agree with man-made climate change, agreed with the woman that the problems need to be addressed. I asked, “So you are against fracking now?” to which Rep. Reed gave a resounding “NO!”  The same woman that brought up the first question allowed that the US had been the largest polluter for decades, Reed countered with “China is now!” When the woman pressed him about the US responsibility in climate change Reed laughed and said ” What do you want to do – go back before the Industrial Revolution?” This topic covered consumed almost 45 minutes of the hour allotted. (Two notable things about his exchange, in retrospect: first, remember that Reed’s vote against funding to help communities devastated by Hurricane Irene in 2011 was one of the things that prompted Nate Shinagawa to enter the Congressional race the following year. Whether Reed’s expressed concern at the meeting will translate into an actual, meaningful response remains to be seen, although I’d bet against it, since historically, there is what Reed says, and there is what Reed does. Second, his “Industrial Revolution” remark, a non sequitur [“it does not follow”] betrays not only the contempt with which he views the science behind climate change, but also how little he is prepared to do anything other than dismiss it with a sound bite. Third, was this an unwitting agreement that world pollution started mainly in the US during said Revolution? Let’s all keep our ears open to see whether we hear this particular refrain repeated.)

The next topic brought up by an attendee was the Trans Pacific Partnership ( TPP), asking if Rep. Reed was for it or against it. Reed replied that he was against it “as it is right now.” I asked why Mr. Reed changed his mind, since he voted for the TPA (Trade Promotion Authority, also known as Fast Track). The Fast Track authority for brokering trade agreements gives authority to the President of the United States to negotiate international agreements that Congress can approve or deny. Reed said he hadn’t read the TPP at that time because it was not available to him (two of us reminded him that it was), so he’d voted for the Fast Track to allow members of Congress to discuss it for ninety days and get it voted on. I said voting for the TPA shortened the time for Congress members to discuss it. Reed said that was ” patently false.” I said that the TPA made the document set in concrete, did not allow a filibuster, amendments, or allow any other changes to the TPP.  Reed replied “that’s right” – and went on saying “that it [ the TPA } created ninety days of discussion followed by an up or down vote. Therefore—and I’m paraphrasing here—if Congress disagreed with the TPP, “they could vote it down and force the changes they wanted in order for it to pass.” (My personal take is that’s how the GOP can simultaneous embarrass the President by voting for the TPA, then preventing the TPP passage while not allowing Congress to negotiate changes the Congressman says he wants in order to let it pass.) This topic took up another half hour.

When I first arrived I made it clear to Rep. Reed’s assistant that I had a brief statement I wanted to share, had filled out one their cards with my name and just the word Statement. The meeting ran later than expected, and there was another person whose card the assistant still held. She pointed to me and signaled it was my turn. Here is an approximation of the statement I made to Tom Reed, as he stood arms folded across his chest with either a concerned look or scowl (I couldn’t tell which):

“I say these things with due respect to the office the Congressman holds. I am dying of cancer. But, with current treatments my life has been extended. The four chemotherapy sessions I have had so far cost $18,000 each, and were followed by other monthly injections at a cost of $450 each. I may be able to take these palliative treatments again, but without the Affordable Care Act’s provision that insurance companies can no longer have limits on what they will pay out, I might very well be given an earlier death sentence having ” reached my limit” on costs the insurer has to pay. I am extremely disappointed that you have voted over sixty times to kill the law that helps people like myself, and millions of others in equally serious situations, to just get minimum coverage.  We hear you say that you “want to repeal and replace Obamacare,” but have never offered a plan explaining just how and what you would replace it with.

“One of my sons is a veteran with twenty-three years of service to our country. I’m very proud of my son, and of all the sons and daughters who serve. You say you care about our veterans and service members and their great sacrifices, yet you denigrate an honorable man who is still serving our country. When you try to diminish him by saying he’s a ‘Washington Insider,’ someone not present in the district he was born in –  you already know it was because he was in different places all over the world serving his country to the utmost. You don’t even agree with some military husbands and wives getting their survivor benefits, because they’re gay or lesbians. When you denigrate one honorable military member, you’re denigrating them all.

“I have four beautiful grandchildren who I want to grow up with fresh air, clean water, and peace. And yet, you short-sightedly encourage the fossil fuel and fracked gas industries, when the majority of your constituents want it left in the ground, and want us to move on, as a country, to sustainables.”

Reed offered his sympathies for my illness, and said to ask if he or his office could help in any way. I told him that I didn’t bring up the fact of my illness for sympathy, but for him to think about the repercussions of his actions on Obamacare. I then said I had to leave, and he immediately pointed to another person in the room, and said ” And what was your question?” (Well, nothing wrong with Reed’s basic manners in offering his sympathies but of course, he did not even begin to address a single one of the three issues I brought up. I spoke succinctly, which should have allowed him time to respond to at least one of them in kind. The write-up about this meeting that I read this morning on the Ithaca Voice website included the observation that the meeting itself felt like a lot of “agree to disagree.” We know that’s another of Reed’s catch phrases, the thing he offers when he cannot formulate a strong argument against an opposing viewpoint. Did the Ithaca Voice writer get that quote from someone on Reed’s staff? Do Reed’s constituents realize that he is saying nothing, when he says that? Does Reed understand, truly, that he’s supposed to be representing us, and not his own self-interests? I’m looking forward to hearing reports from his other meetings that day.)