One of the members of the audience of a dozen was an area doctor, who I have seen before at 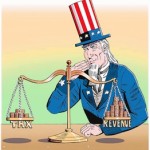 Reed’s Town Hall Meetings, who strongly supports the  “Fair Tax” concept. He requested Rep. Reed to update the group on the congressional activity dealing with reforming the Income Tax Code.

Reed explained that the present Tax Code is “broken…antiquated” and needs a whole rewrite. He feels that the House, Senate and White House need to be committed to reforming it but doesn’t expect to see that the White House being committed until after the Presidential Election. He assured us that the House’s Ways and Means Committee, which he is a member, has been having  “sincere” debates on Income Tax Reform. They have created three guiding principles—to simplify the code, make it fair, and make it competitive.

Having the Income Tax more competitive means making sure the U.S.A  can compete with the other counties in keeping our corporations located here. Reed pointed out that we have the largest corporate tax rate in the world and –surprise–he wants to reduce it.

The closest reference he made to “make it fair” was a reference to Rep. Dave Camp’s proposed revenue neutral—distribution neutral tax code. It would not raise taxes and it keeps the tax burden at the same level. Forbes reported  that the independent Taxation and Policy Center reviewed Camp’s plan and said, “its long-run effects on revenues are “highly uncertain.”

When Rep. Reed asked the audience, “What do you think we should do?” a member quickly said “Abolish the IRS completely”. Reed responded, “The reality is that you are still going to need an agency to collect it and monitor it.” He explained that monitoring the taxes means seeing that it is going to be correctly assessed and that people are paying their correct taxes.

He responded to the Fair Tax advocate by saying that the Fair Tax debate centers around the fact that is is a very regressive tax; the lower income earners pay a higher percentage of their salary than medium to high income earners. Responding to that claim, Fair Tax supporters have suggested to provide rebate checks to certain income levels. Reed questions who will determine which income levels should receive the rebates and, who will define what is meant by income. Is it the W-2 amount, does it include investments and/or retirement savings? Reed was respectful to the Abolish IRS and Fair Tax supporters, but the sense is that he really doesn’t support either.

Rep. Reed, in his recent Official Survey, asked his constituents, “Do you support passing a long-term tax bill if it will lower taxes while also eliminating or reducing deductions.” (Yes, No, or Unsure). Any Income Tax reform will be around for a long time; if it is going to be simple, fair and competitive it needs to be bipartisan, and thought out completely. The public deserves to understand the details before committing to definite answer to this question.

Retired Teacher, political science geek, village trustee. I lean a little left, but like a good political discussion. My blog, the New NY 23rd (http://newny23rd) is about discussing the issues facing the people of our new congressional district. Let's hear all sides of the issues, not just what the candidates want us to hear.
View all posts by pystew →
This entry was posted in Congress, Constituents, Data, Economics, Reed's Views and tagged Abolish the IRS, Fair tax, Income Tax Reform, Phelps Town Hall Meeting, Rep. Camp's Tax Proposal. Bookmark the permalink.