What the EPA really said

The following the article was written by Michael Fitzgerald and was published in his June 12 Finger Lakes Times column “Write On”, (which appears Fridays). On Friday, Mr. Fitzgerald’s 2014 novel, “The Fracking War”  was awarded best General Fiction at the Green Book Festival (Part of the New York Book Festival).  This article is reprinted with permission of the author and the Finer Lakes Times.

Please note I have included Rep. Reed’s comments about the EPA’s decision of the impact of Hydrofracking, since Mr. Fitzgerald referred to it. It was not in his FL Times column.

Rep. Tom Reed (NY-23), June 4, 2015: Today, I am again calling for the repeal of Governor Cuomo’s politically-motivated ban on hydraulic fracturing, in response to the EPA’s finding that this method of natural gas extraction does not pose a threat to public drinking water.

What the EPA really said

The federal Environmental Protection Agency’s draft report issued last week about the potential impacts of hydrofracking on the nation’s drinking water triggered an avalanche of expansive — and false — claims by hydrofracking proponents that the extractive technology had been declared safe.

Locally, Congressman Tom Reed popped up like a political Jack-in-the-box and — quite predictably — called on New York Gov. Andrew Cuomo to lift the state’s ban on hydrofracking.

The avalanche of claims that hydrofracking had been vindicated was triggered by many erroneous media reports that spun stories based on the first paragraph of a two-page EPA press release announcing completion of the nearly 1,000-page draft study.

Those media outlets didn’t bother to read the entire press release. Or even past the second comma. If they had, the stories should have been considerably more measured.

The EPA report is not an endorsement of hydrofracking or claims it doesn’t cause drinking water problems. In fact, it is actually quite damning, not so much of the actual drilling process per se but of everything surrounding it.

It’s similar to the question of whether hydrofracking causes earthquakes. Studies show drilling isn’t triggering temblors. But disposing of the millions of gallons of wastewater into deep injection wells is.

Here’s the pivotal sentence — from the first paragraph of the press release:

“The assessment … shows that while hydraulic fracturing activities in the U.S. are carried out in a way that have not led to widespread, systemic impacts on drinking water resources, there are potential vulnerabilities in the water lifecycle that could impact drinking water.” 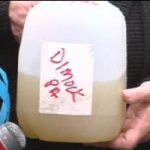 Those issues aren’t part of the drilling but are wreaking environmental havoc.

Cement well-casing failures — which can let water laced with toxic chemicals into the water table or release methane gas — may not be systemic. But even industry studies show an alarming rate of failure.

And wastewater getting into drinking water deserves particular scrutiny.

Since hydrofracking started booming — largely because of oil and gas industry exemptions since 2005 from the federal Safe Drinking Water Act of 1974 and the Clean Water Act of 1972 — drilling has produced about 300 billion gallons of wastewater laced with toxic chemicals.

This water is lost to the water cycle because the chemicals cannot be removed to make the water potable or fit to use for irrigation.

And there have been enough wastewater spills, and even deliberate illegal dumping, to raise plenty of alarm.

The lengthy EPA report is going to take time to analyze. And during that analyzing opponents are going to have to put up with pro-hydrofracking forces trumpeting their misinterpretation of the EPA’s summary paragraphs as gospel.

But we can hope the draft report eventually prompts an enraged public to ask exactly why the oil and gas industry has exemptions to the federal Safe Drinking Water Act of 1974 and the Clean Water Act of 1972.

It’s as if all U.S. restaurants banded together and wailed they couldn’t serve food unless they were excused from following health regulations — and then received a blanket, federal get-out-of-jail-free card, telling them they were exempt from health laws.

The EPA did offer one semi-bright nugget.

While mentioning the oil and gas industry’s exemptions to federal clean water laws, the EPA pointed out that most states already have authority to regulate oil and gas extraction, should they choose to do so.

Now if states just would step up. The EPA says they have the power.

Retired Teacher, political science geek, village trustee. I lean a little left, but like a good political discussion. My blog, the New NY 23rd (http://newny23rd) is about discussing the issues facing the people of our new congressional district. Let's hear all sides of the issues, not just what the candidates want us to hear.
View all posts by pystew →
This entry was posted in Constituents, Environmental, EPA, Ethics, fracking, Hydrofracking/Gas& Oil Industry and tagged Cuomo's Fracking Ban, EPA, EPA Fracking Report, Fracking. Bookmark the permalink.

4 Responses to What the EPA really said