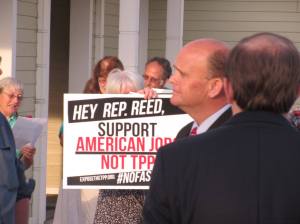 was “The Trans-Pacific Partnership (TPP) and Trade Performance Authority (TTA)”.

Rep. Reed calls the TPP the “trade agreement and the trade agenda for America’s future”. Although he at times belittled those who oppose the proposed Trade Agreement by exaggerating their views, Rep. Reed tried to presents a decent simplified description of the complex Multinational Trade Agreement. Like all good politicians, Rep. Reed only tells us what he wants us to think. He pointed out:

The 95 percent comment may be a bit confusing. The TPP does not open up 95 percent of the world’s markets, but multinational agreements in general would open up the foreign markets. I could not find a listing of the 150 points that Rep. Reed referred to in the last comment, but found articles that referred to them. One was from the Congressional Research Service. The topic starts on page eight.

Hear the questions and Rep. Reed’s comments about TPA in the following video:

After Rep. Reed summarized why he supports Fast Tracking he explained why it was necessary for congress NOT to be able to proposed amendments to the TPP and to only be able to have an up or down vote: Consider the negotiating nightmare it would be if the United States and the 10 other nations had the power to change the document that the official negotiators had agreed on–then return to the tables and re-negoatited those terms. Then that cycle continues.

At that point, Victor Tiffany, questioned the constitutionality of Fast Tracking. (If you listened to the first video you may have heard Reed’s District Director Joe Sempolinski mention Victor’s name when he read the questions–and that Victor called Fast Track unconstitutional.) Tiffany’s reasons to categorize it as illegal is (1)  the Executive Branch is negotiating the agreement, not the Legislative Branch  as it is suppose according to in the Constitution’s Commerce Clause and (2) if the agreement is a “treaty”, it should be ratified by the Senate with a 2/3 majority and the House would have nothing to do with it. Reed dismisses the second  item by saying, “I would see at it as an enhancement to make sure the House is weighing in and approving the agreement.”

Tiffany responded: “The framers (of the constitution) laid down the course here. Now if you want to say “Screw the framers we want to do it our way” if you want to make that case—fine.” Rep. Reed was lost for words.

The following five-minute video includes the full exchange between Reed and Tiffany.

Rep. Reed, responding to a Donald Trump comment about China, explains that TPP he would love to have China at the TPP negotiation table. The conversation would have gone longer, but another audience member seems bored with this topic and interrupts the questioner and changes the topic. This shows Rep. Reed’s inability to control his audience.

Finally, another audience member, “Steve” who is an union member, told of his concern that multinational corporations from TPP member countries can sue the United States if our laws hinder the corporations to realize as much profit as possible. Rep. Reed states that this has never happened before with other trade agreements. Steve responds that our laws have not been changed by these lawsuits, but fines have been paid. Rep. Reed doesn’t disagree.

See the discussion in this short video clip.

Please realize that the the idea that American jobs would be lost to the other TPP countries didn’t come up for discussion. I’m sure that is the major reason that Labor is against this proposal. In Viet Nam, $0.60 an hour is a good wage. The Trans-Pacific-Partnership and the Trade Performance Authority is complex and controversial. The New NY 23rd has had other articles  with many comments on those issues. Follow the links to read the articles:

How easily we are fooled

The Trans-Pacific-Partnership is not just a “Trade” Pact. (Written by Victor Tiffany)

5 Responses to Rep. Reed on Trans-Pacific-Partnership and Fast Tracking