Republicans Love the SAFE Act and Really Do Not Want it Repealed!

From the day the SAFE Act was passed  New York State Republicans realized it was a great gift from Governor Cuomo. They quickly seized the opportunity to use their political skills to develop it into the  issue that a large portion of the population would passionately oppose.

Right winged groups created the atmosphere of fear.  It was easy for the Pro-Gun and Anti-Government websites to get their member riled-up.  SCOPE sold “Repeal The SAFE Act” signs, to a tune of $7 each, which publicized their anger at the Governor. Conservative talk radio personalities flared the fire of discontent.  Elected officials, including congressional representatives (often lawyers), county sheriffs and legislators declared the ACT was unconstitutional. (Too bad that State and Federal judges do not agree.)

Below is a map of the state showing how each county voted in the Governor’s race: Cuomo (Blue) or Astorino (Red). If you follow the link to Politico, you can see how large the margin of victory in each county. 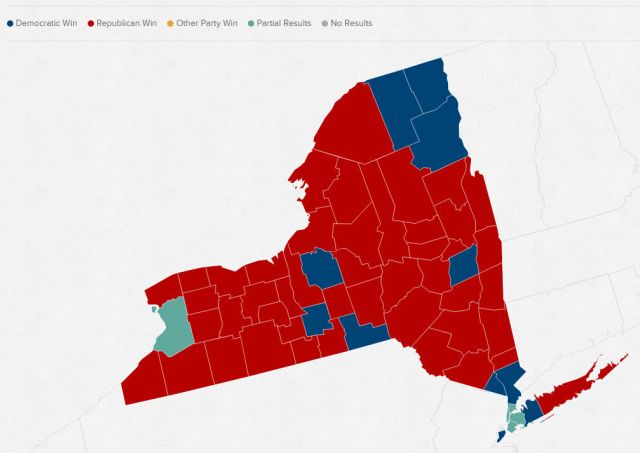 (For information about NYS’s House Races for 2014, including a map similar to the above Governor’s race follow this link.)

On Friday, October 17, an email was forwarded to me titled “UNSAFE ACT 2”. It originated from the Finger Lakes Tea Party. The email, which is a copy of an article on the Bullet First website, declares, “Cuomo To Sign SAFE ACT 2 Into Law If He Gets Reelected.” I received it 18 days before the election.

The article states that the “framework is all ready in place for the passage of SAFE ACT 2” The email/article does not name sources of the information they presented. It continues, “Here are the 10 key points of SAFE ACT 2 that will punish law abiding citizens, legal businesses and in general diminish the sparse amount of liberty that remains in the increasingly appropriate named ‘Empire State’ .” (The link to the Bullet First site, above, gives more details, including the author’s opinions on each topic.)

In other words the SAFE ACT 2 would contain items that have been talked about for years and many have been in placed in other states.

I assumed that this was sent to rally the troops for the election. Could this also be the first step to keep the furor alive for the next two years? After all the anti-SAFE Act rhetoric influenced the 2014 election outcome so well for the republicans, why give it up now?

The Republicans Love the SAFE Act–they don’t want it repealed.

**Other New NY 23rd articles about the SAFE Act.**

Retired Teacher, political science geek, village trustee. I lean a little left, but like a good political discussion. My blog, the New NY 23rd (http://newny23rd) is about discussing the issues facing the people of our new congressional district. Let's hear all sides of the issues, not just what the candidates want us to hear.
View all posts by pystew →
This entry was posted in Constituents, Gun Violence, Reed's Views and tagged 2014 Campaign, 2016 Election, NRA, REPEAL the SAFE Act, SAFE Act, SCOPE. Bookmark the permalink.

36 Responses to Republicans Love the SAFE Act and Really Do Not Want it Repealed!