What in the World is Cloward-Piven?

When references are made to Cloward-Piven, the impression frequently is that these two academic Sociologists are today’s equivalent of Marx and Engels. The controversy comes from an article published in The Nation in 1966, The Weight of the Poor: A Strategy to End Poverty, which is referenced below. So what is all the fuss about? Addressing how to end poverty, Cloward and Piven wrote:

The strategy (for ending poverty) is based on the fact that a vast discrepancy exists between the benefits to which people are entitled under public welfare programs and the sums which they actually receive. This gulf is not recognized in a society that is wholly and self-righteously oriented toward getting people off the welfare rolls. It is widely known, for example, that nearly 8 million persons (half of them white) now subsist on welfare, but it is not generally known that for every person on the rolls at least one more probably meets existing criteria of eligibility but is not obtaining assistance.

The discrepancy is not an accident stemming from bureaucratic inefficiency; rather, it is an integral feature of the welfare system, which, if challenged, would precipitate a profound financial and political crisis. The force for that challenge, and the strategy we propose, is a massive drive to recruit the poor onto the welfare rolls. 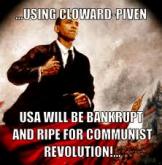 This article is a classic–written in 1966, it is still widely cited today. Anyone interested should have no trouble finding right-wing attacks on Cloward-Piven; one is cited below. Who would think the central tenet of the feared and hated Cloward-Piven strategy is to encourage people to claim benefits to which they are entitled.

(While the Amazon Ad for The Myth of the Welfare Queen doesn’t spell it out, Odessa Williams and Cheri Honkala worked to overcome obstacles to get people the benefits to which they were entitled.)

* Contributor at NewNY23rd.com where we discuss the politics, economics, and events of the New New York 23rd Congressional District (Allegany, Cattaraugus, Chautauqua, Chemung, (Eastern) Ontario, Schuyler, Seneca, Steuben,Tioga, Tompkins, and Yates Counties) Please visit and comment on whatever strikes your fancy.
View all posts by whungerford →
This entry was posted in Congress, Economics, Political and tagged Cloward-Piven, Entitlements, Poverty, Welfare. Bookmark the permalink.