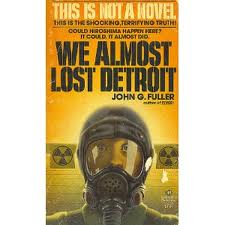 Robert Stone recently made a movie, Pandora’s Promise, which reportedly argues that nuclear power is a reasonable and necessary major source of electrical energy while slowing global climate change. I have not seen Pandora’s Promise and will not discuss it here; I plan instead to relate my brief and dated experience with nuclear power and explain my position on it.

I have in hand a work of non-fiction — We Almost Lost Detroit — by John G Fuller copyright 1975. This work was controversial when published and is certainly out-of-date. Nonetheless I consider the 1975 experience instructive: technology has changed, but human nature hasn’t.

I worked as a junior engineer for Detroit Edison in 1966, the year of the accident at the new and innovative Enrico Fermi generating plant.  I wasn’t involved in nuclear engineering or power generation, but I knew something about the Fermi plant which was located between Detroit and Toledo about 30 miles from each city.  At the time there was great interest in nuclear power. In 1954, Lewis Strauss had famously predicted that atomic power would make electricity “too cheap to meter.”  The managers at Detroit Edison were certainly interested in generating power cheaply to increase profits, but they had a concern — they wanted to design and own these profitable generating stations, and they wanted to keep the Federal Government out of their business.

Utility executives are generally very conservative, as were managers at Detroit Edison, but in this case they acted rashly deciding to build a fast breeder reactor unlike any other. The following may have been considerations:

A number of obstacles to construction threatened the project:

In spite of the above, the project went forward as political interests swamped technical concerns.  Walker Cisler, the president of Detroit Edison, told the press that the safety issue was a subterfuge, opponents of the plant wanted to keep atomic power development in the hands of the government: the road to a socialist state.

The Fermi plant would be expensive, so the utility elected to cut costs:

Incredibly, the Fermi plant was to be built first and tested afterwards: there was no comparable prototype.  It failed during initial testing and never produced power commercially.

Technically, nuclear power might be made safer.  Physicist Richard Feynman reportedly proposed a nuclear reactor that could not melt down or explode; more recent intrinsically safe designs have been promoted. But intrinsically safe designs can’t fully compensate for human mistakes and folly — Three mile island, Chernobyl, and Fujishima as well as the Fermi plant are cases in point.

Here then is my opinion — private for-profit interests should never be responsible for nuclear power plants because the profit motive is sure to trump safety.  Nor should government be responsible — Congress can’t be counted on to act responsibly.  Nor would I trust an independent public authority like the FED, NASA, or the Nuclear Regulatory Commission unless it could be made completely immune to political pressure.  Plants may be made safer, but the potential for human mistakes should never be discounted.