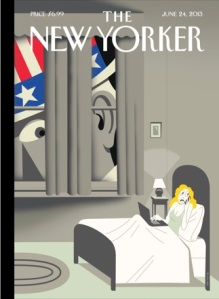 These three novels may be relevant to today’s politics:

In “Nineteen Eighty-Four” the characters struggle to maintain individuality in a world which requires conformity with the dictates of the ruling party. Every room, public or private has a two-way TV monitor always on.  When Winston Smith slacks off on mandatory calisthenics in front of the TV, the instructress notices and demands he work harder.

In “Player Piano,” working class “proles” have been segregated from the ruling technocrats so that they can be safely left to do what they will.  The fact that state security, seemingly unobtrusive,  is effective is clear when Paul Proteus is arrested.

In “Super Sad True Love Story,” surveillance is open and ubiquitous.  Not only do the authorities know everything, but a persons credit rating and attractiveness score are publicly broadcast.   The Super Sad world has no old-fashioned TV-like monitors: indispensable hand-held electronic äppäräti enable monitoring that goes beyond “Orwellian.”

Monitoring of phone calls and internet usage authorized by the Patriot Act is much less intrusive than monitoring imagined by Orwell or Shteyngart.  The major concern today may be that secret monitoring is hard to manage.  I believe that Senator Wyden has a valid concern:  if government officials deceive Congress, how is Congress to see that the spies don’t exceed their mandate.  Spies may be focused on potential terrorists today, but turn their attention to political dissidents tomorrow — it has happened before in our history.

Workplace spying may be a greater concern than government activities:

Workplace spying is far more common and potentially significant than anything we know our government does.

Commercial spying too is ubiquitous now: every time we see a specific advertisement after doing an internet search we get a hint of that. By signing up with Google, Yahoo, or others we facilitate and consent to a sweeping loss of privacy.

The following article by historian Jill Lepore explains in detail much about mystery, secrecy, and privacy.   Who knew that far before Orwell, Louis Brandeis warned of the “encroachment of the technologies of secrecy on the right to privacy?”  Who knew that the secret ballot for elections dates only from the late 1800s?

* Contributor at NewNY23rd.com where we discuss the politics, economics, and events of the New New York 23rd Congressional District (Allegany, Cattaraugus, Chautauqua, Chemung, (Eastern) Ontario, Schuyler, Seneca, Steuben,Tioga, Tompkins, and Yates Counties) Please visit and comment on whatever strikes your fancy.
View all posts by whungerford →
This entry was posted in Media, Political, Rights. Bookmark the permalink.