The summer of 2011 saw an onslaught of extreme weather disasters across the United States. The most well remembered would be the tornadoes in Missouri and other midwestern states, Hurricane Irene’s trek through fourteen East Coast States, and Tropical Storm Lee’s Flooding of a string of southern states and various unfortunate places along the border of Pennsylvania and New York, which includes parts of the NY 23rd Congressional District. 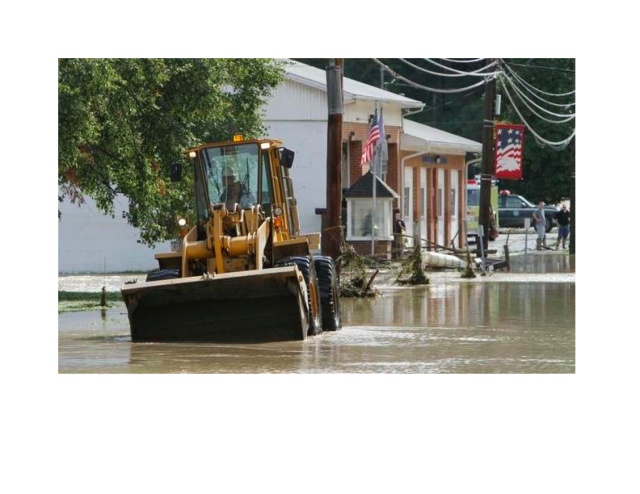 One village in our congressional district that was hit hard by Tropical Storm Lee was Wellsburg, which hugs the Pennsylvania border just east of Elmira in Chemung County. Wellsburg, population 580, had applied for disaster relief from FEMA, and was informed it would be eligible for $2 million to rebuild and relocate their Fire House which was severely damaged during the flood.

Last week, Rep. Reed, through a Press Release at the end of May took credit securing the funding for the new Fire House.

“Today’s funding is long overdue and well-deserved for a community hit hard by Tropical Storm Lee,” Reed said. “The process was a lengthy one but following months of constant communication and stressing the need to prioritize recovery efforts, the Village of Wellsburg will get the assistance it needs. We were pleased to be a voice for the village and advocate on its behalf. Today, we are happy to announce the project is moving forward and an end is in sight.”

The Press Release from Senator Schumner’s office tells a different tale.  Schumner reports that Wellsburg received only $1,400,000 of the promised $2 million. The discrepancy is connected to the type of  Flood Insurance the Village of Wellsburg had on the Fire House.  Schumner’s press release states:

“Schumer explained that, while FEMA is required to deduct proceeds from insurance policies from their reimbursement, in this case FEMA made the maximum flood insurance deduction of $500,000. This was despite the fact that the Village received less than $200,000 in flood insurance proceeds after the storm. Because FEMA typically reimburses 75% of the project costs not covered by insurance, the excessive deduction of up to $340,000 would result in the Village being required to cover up to $255,000 extra. This could cost taxpayers thousands.

Senator Schumner is emphasizing that the since this is a public safety item “Fema should swiftly reverse course and reconsider the recent decisions it has made.”

“If the Village had to make up $340,000 the average taxpayer would pay $1,500 more.  The tax implication of covering this gap in a small village like Wellsburg is astronomical. This, coupled with the constant delays in obligation of funding, makes it very difficult for us determine where we stand with our project,” said Village of Wellsburg Mayor Malcolm Coles.  “Because of the constant support and backing from the Senator, I believe we are going to get to get through this maze and reach the finish line.  Without Senator Schumer, I don’t know where we would be.”

Wait a minute…I thought Rep. Reed was the ‘voice for the village’ as Reed’s staff worked on this case for months. Why didn’t the Mayor of Wellsburg thank Rep. Reed?

Don’t be surprised. Rep. Reed, back in 2011, just at the time that Tropical Storm Lee had hit the Southern Tier, was agreeing with House leaders Boehner and Cantor not to increase funding for FEMA. Their plan was to transfer funds from social safety net programs to FEMA.

Who would you rather go to bat for you when you’re facing FEMA, Senator Schumner or Rep. Reed?  I have already decided, so has Wellsburg, NY.

Retired Teacher, political science geek, village trustee. I lean a little left, but like a good political discussion. My blog, the New NY 23rd (http://newny23rd) is about discussing the issues facing the people of our new congressional district. Let's hear all sides of the issues, not just what the candidates want us to hear.
View all posts by pystew →
This entry was posted in Economics, Environmental, Reed's Views, Sequester/Fiscal Cliff and tagged Federal Emergency Management Agency, FEMA, Hurricane Irene, New York, Press Release, Southern Tier, Tropical Storm Lee, United States. Bookmark the permalink.